A Message from Our Chancellor

I Invite You to Join Our Community

Welcome to Webster University – a truly unique global institution. While we have made our home in St. Louis for over a century, our university community is comprised of a network of campuses – both traditional residential and sites tailored for working adults – in communities around the world. Whether you are an undergraduate or graduate student, Webster is a place to learn about yourself and to learn about the world around you.

Members of our diverse campus community travel and connect with each other in person in our vibrant campus locations – immersing themselves in global opportunities on four continents. They also connect and study online in a robust online learning environment. We are dedicated to the kinds of high-quality learning experiences that help you advance your career and life goals. Discover what it means to be a Gorlok and to prepare yourself to be excellent in your career and to live as a global citizen.

I hope to see you on Twitter (@ChancellorBeth) and Instagram (beth.stroble), or when you visit us in person. 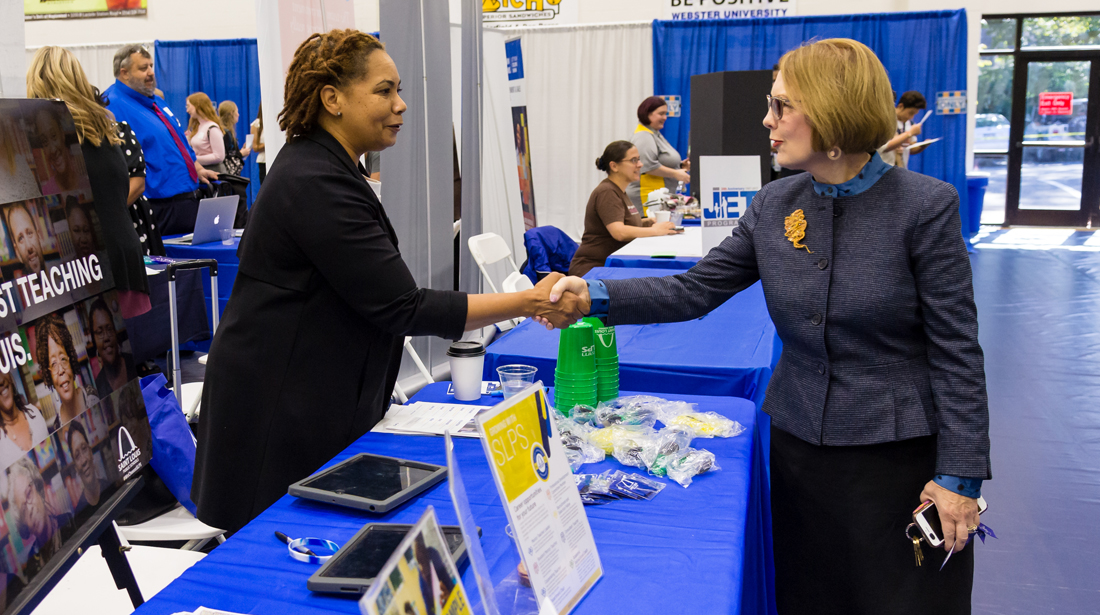 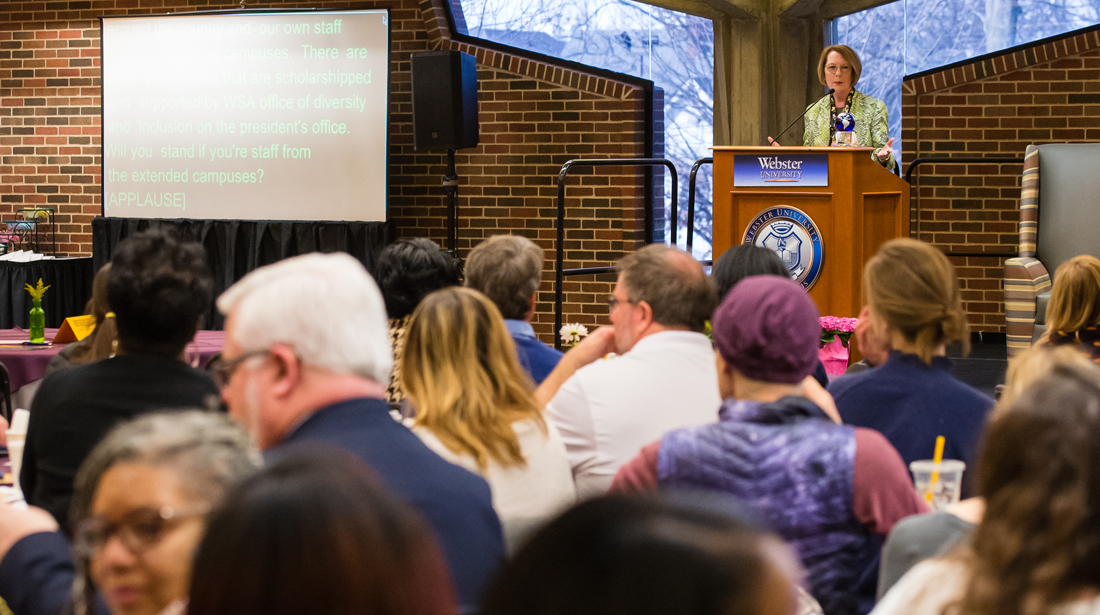 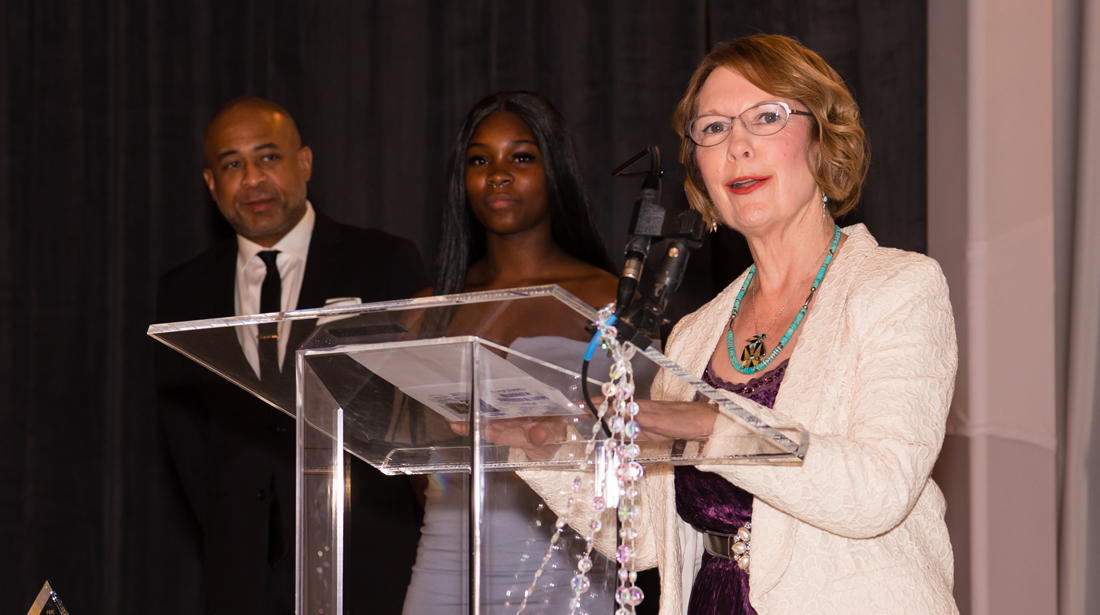 The Chancellor is the principal leader for Webster University's global university system, with campuses on four continents and over 210,000 alumni. Daily leadership for this role includes strategy development and engagement of external audiences to grow the University's impact and reputation, leading the university's strategic vision, fundraising efforts, and direct oversight of the offices below. Under Chancellor Stroble's decade leading Webster, the University's endowment has grown 160% and its ranking in the annual U.S. News & World Report "Best Colleges" rankings has moved from 33rd to 15th in the Midwest Regional category.

We've stood by a core value for more than 100 years: At Webster, there is a place for everyone.

We connect with alumni and donors who ensure students can pave their own path to success.

We are active in our community, working to make our world a more just and sustainable one.

We help plan and implement a wide variety of University events that bring people together.

We started as the Sisters of Loretto and have grown to engage learners around the world.

We are known for our inclusion, value, and global opportunities that no other university can offer.

Elizabeth (Beth) J. Stroble is Webster's first chancellor to serve as principal leader for the global university system, after serving as Webster's 11th president since 2009. During a decade of her leadership, Webster has more than tripled its endowment, substantially increased private scholarship funding for students, and strengthened Webster's global diversity. Across her career at public and private institutions, Stroble has emerged as a nationally recognized champion of expanding access to higher education through need-based student aid, while also advocating vigorously for federal support of university-based research. She is an experienced leader in American higher education, known for her commitment to increasing educational access and success for students worldwide, catalyzing academic innovation, and encouraging universities' civic engagement and service to society.

During her tenure, Webster has engaged in a period of transformation, with an increased focus on overall institutional excellence, which resulted in increased funding from private donors, government agencies and businesses, creation of several endowed professorships, and improving academic facilities and technologies necessary for Webster’s programs. Webster's place in the annual U. S. News & World Report "Best Colleges" ranking has risen from 33rd to 15th among Midwestern Regional universities and gained recognition for economic diversity, social mobility, and service to veterans. She launched Webster's Office of Diversity, Equity, and Inclusion and highlighted its mission as a cornerstone of the university's excellence. Most recently in March 2019, she was named by Diverse Issues as one of the top 35 women making an impact in higher education.

Stroble's current research focuses on the relationships among place, identity, and community. She advocates for global inclusion and leadership, innovative public-private partnerships, and the value of independent universities through publications, invited presentations, and service to international and national organizations of university leaders and heads of corporations and government agencies. As higher education co-chair for the African Renaissance and Diaspora Network, she engages colleagues and students worldwide in popularizing the advancement of the United Nations Sustainable Development Goals with a specific focus on achieving gender equality. As a member of the board for the Urban League of Metropolitan St. Louis, she chairs the education committee.

In his role as President, Julian Schuster serves as chief academic officer and chief advisor to Chancellor Elizabeth (Beth) J. Stroble and has direct involvement in the strategic and day-to-day leadership of the institution.

Schuster assumed his position at Webster in July 2010, after serving as Founding Dean of the Hamline School of Business at Hamline University in St. Paul, Minnesota. Prior to that, he served in several capacities at the University of New Haven from 1996 to 2006, including chair of the Department of Economics and Finance, director of the doctoral program, director of the Executive MBA Program, and associate dean and dean of the School of Business.

Over the course of his career, Schuster has pioneered global alliances and promoted strategic investment in academic excellence, strengthening and expanding collaborations with more than a dozen international partner institutions.

Schuster received bachelor's, master's and doctoral degrees in economics from the University of Belgrade, one of the oldest and largest universities in the western Balkans. He currently serves on the Board of Governors of the University Avenue Business Association and on the Editorial Board of the International Journal of Pluralism and Economic Education. Schuster's professional memberships include the American Economic Association, the Eastern Economic Association and the American Association for the Advancement of Slavic Studies.

Ryan has 20+ years of progressive responsibility and experience in government, non-profit agency and higher education environments, starting his career working in the U.S. House of Representatives, Third Congressional District-Missouri Office, of the Hon. Richard A. Gephardt, and as a fundraiser for the National MS Society—Gateway Area Chapter where he Implemented donor-based fundraising campaigns and special projects.

As Vice President for Academic Affairs, Hellerud is responsible for Academic Affairs divisions and programs that support and strengthen student success, including Academic Advising, the Reeg Academic Resource Center, and the Faculty Development Center. She is coordinating collaborative initiatives among the schools and colleges of Webster University. In support of global mobility for students and faculty, she oversees Study Abroad, Global Program Development, the Webster International Network of Schools (WINS) Program, and the Confucius Institute. In addition, she manages Webster’s institutional accreditation and oversees the Office of Institutional Effectiveness.

Loftus has extensive experience in higher education leadership, serving as a university president and as head of enrollment and strategy teams. Prior to joining Webster in 2021, he twice led enrollment management for St. Ambrose University in Davenport, Iowa, from 1998-2011 and returning in 2017. From 2011 to 2017 Loftus served as president of Cardinal Stritch University in Milwaukee, where he helped the university prioritize liberal arts and professional programs and promote core activities of teaching, learning, scholarship and service.

His previous experience includes a Big-4 CPA firm, regional construction company, and a large international construction/engineering firm.  Rick is a veteran of the United States Marine Corps and serves as the voluntary CFO of two non-profit Veteran Service Organizations.

Rockwell is the co-author of the book, “Media Power in Central America,” which won a national Choice Award from the American Library Association, among other accolades. He has worked as a radio and television producer for ABC News, a freelance reporter/producer for the PBS “NewsHour,” and a senior producer for Discovery Communications. Rockwell earned a Bachelor of Science in Journalism (BSJ) degree in radio-TV journalism from Northwestern University and a Master of Arts in international journalism from the University of Southern California.

Wiley is responsible for managing all official correspondence with Trustees, maintaining official records of all trustees and trustee committee meetings, keeping official records of actions taken by trustees and providing assistance in interpreting policies and matters of jurisdiction and governance. She collaborates with the Chancellor, the President, and Trustees to address issues of institutional governance, such as privacy, security, equity and communications. Wiley also serves as the University's liaison to external counsel for all legal issues institutionally.

In her role as Senior Privacy Director, Wiley serves as the main link and point of contact between University's privacy program and University´s Senior Leadership, Board of Trustees and various committees. She is responsible for the organization's privacy program system-wide including daily operations of the program, development, implementation, and maintenance of policies and procedures, monitoring program compliance, investigation and tracking of incidents and breaches and insuring constituents’ rights in compliance with international, federal and state laws and regulations. Wiley works closely with internal and external stakeholders at each of Webster University’s international campus locations and/or partner locations.

Currently, Wiley serves on the Board of Directors for Carney’s Kids, a non-profit organization in St. Louis that provides financial support and creates positive publicity for not-for-profit organizations whose primary goal is to improve the lives of children.

“We are thrilled to be able to increase our Suggs Scholars. We know these students are engaged and talented and will become leaders on campus.”

Highlights from the Office of the Chancellor

Who do you want to speak at the 2022 Commencement Ceremony? Nominations are open through Friday, October 1. https://t.co...