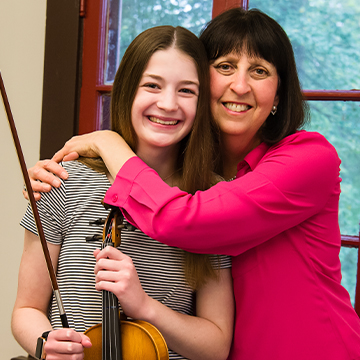 The combination of performance and teaching expertise throughout our faculty means students receive an exceptional quality of music education at all levels. Every CMS teacher has a minimum of a bachelor’s degree or equivalent experience, and 85% have advanced degrees. In addition, many teachers are sought-after performers and guest clinicians who teach others how to teach.

Performances with orchestras include the Catholic University of America Orchestra, the St. Louis Gateway Festival Orchestra, and the University of Missouri-St. Louis Orchestra. Instrumental and vocal collaborative coaches include: the Arianna String Quartet, Rick and Sharon Christman, Steve Morton, Alla Voskoboynikova, Stella Markou, and Ralitza Patcheva. Past instructor positions: faculty at the International School of Music in Washington, D.C., teaching assistant at the Catholic University of America, and private piano instructor at the Arts on Elm in O’Fallon, MO. Students have successfully participated in regional and national competitions and have been selected to perform at the Kennedy Center in Washington, D.C. and Carnegie Hall in New York.

Daniel Schene, piano*
Daniel Schene was born in New York City and has been heard as recitalist, concerto soloist and chamber musician across the United States and Canada, and in France, Italy, Greece, Chile, Brazil and Taiwan. Recent performances have included several concerts at the International Chamber Music Festival of Para, Brazil; a recital at the Salle Cortot; and performances of the Brahms Second Piano Concerto in St. Louis.

Mr. Schene is a frequent guest artist with the St. Louis Symhony's Chamber Music St. Louis series, and is the duo partner of violinist Eva Szekely of the Esterhazy Quartet, and pianist of the Trio Americas. In addition he has collaborated with renowned cellist Zara Nelsova and violinist Denes Kovacs, Director of the Liszt Academy in Budapest. Mr. Schene has premiered several works of composers Andrew List and James Willey.

After his debut at age fifteen with the Charlotte Symphony, Daniel Schene studied at the North Carolina School of the Arts with Rebecca Penneys, and subsequently at Indiana University with Gyorgy Sebok and Enrica Cavallo-Gulli. At Indiana University he received the prestigious Joseph Battista Memorial Scholarship.

In demand as a teacher as well as performer, Mr. Schene is Artist in Residence and Director of Piano Studies at Webster University. He is a founding faculty member of the Indiana University Summer academy and the Institute of Advanced Vocal Studies in Paris. He has given guest master classes in France, Brazil and Taiwan.

Mr. Schene records for CRI.
"A demonstration of exquisite pianism and musicianship."
"Mr. Schene owns a store of bravura showmanship that can be tapped when the music calls for it...when it was unleashed it was stunningly effective."

Marschnee Strong, piano
M.A. Piano Performance, Webster University; teachers include Peter Henderson (Maryville University), Daniel Schene (Webster University), and Groff Bittner (Lindenwood University); serves as State Chair of Music in Schools and Colleges for the Missouri Federation of Music Clubs (MFMC) and locally founded St. Louis Music & Performing Arts Club, which connects local musicians and students with scholarships and awards through NFMC and other philanthropic organizations; Chair of Monster Concert (a piano ensemble performance event) with the local affiliate of the Music Teachers National Association (MTNA); as pianist and teacher has received scholarships and awards from the National Federation of Music Clubs (NFMC) and Webster University.  Memberships with MTNA and the National Federation of Music Clubs (NFMC) provide continued professional development in pedagogy and performance, and through these organizations she serves annually as a coordinator and adjudicator of numerous district and state music festivals and competitions.

Carolbeth True, piano (Jazz)
Carolbeth True has been a very active member of the St. Louis musical community for many years. She is adjunct faculty at Webster University—teaching jazz and classical piano, accompanying Webster Jazz Singers; maintaining an extensive private student roster. She performs with Two Times True with son Dave True on drums, Larry Johnson--saxophones, Glen Smith--bass; The Carolbeth Group; The Randy Holmes Quintet; The Oikos Ensemble led by Reverend Cliff Aerie--saxophones; and Wind of the Spirit Praise Band at Webster Groves Christian Church.  Carolbeth and Randy Holmes are original cast members of "The Jazz Story", a 1-hour overview of jazz history at the Sheldon, now in its 22nd season. Carolbeth has been the pianist for the MCDA All State Jazz Vocal ensemble for 7 years; and rehearsal and orchestra pianist for Variety Children’s Theatre’s world-class fall musical production for 9 years. Carolbeth received the Excellence in the Arts Award from the Arts and Education Council; the Riverfront Times and St. Louis Magazine’s Best Jazz Artist Award; and the Citizen of the Year Award for Rock Hill, her home community.  Carolbeth is heard on several cds: “True”, “Two Times True”, Larry Johnson’s “Circles” and “I’m Just Sayin’ and “I’m All Smiles” with vocalist Debby Lennon. A new Christmas jazz cd will be out in late November.

Pavel Ilyashov, violin and viola
B.M. violin performance, Curtis Institute of Music; 14-year tenure with Virginia Symphony; appeared with Tacoma Symphony, the National Philharmonic of Honduras, Chicago Symphony, Philadelphia Orchestra, Caramoor Festival, Bargemusic, and on Performance Today radio program; chamber collaborations with Yo Yo Ma, Jaime Laredo, Paquito D’rivera, and members of the Emerson String Quartet; recipient of the 2019 Outstanding Music Educator Award with the Bay Youth Orchestras of Virginia; served on the faculty of the Governor’s School for the Arts and the Hampton Roads Chamber Players; has taught master classes throughout the Americas and participated in teaching festivals in New York, Colorado and Lima, Peru; global ambassador for the Youth Orchestra of the Americas.

Angie Smart, violin*
Angie Smart has been a First Violinist with the St. Louis Symphony since 1998. Originally from England, she began violin lessons at the age of six and won a scholarship to study at Chetham's School of Music at the age of 13. She continued her studies in the U.S. in 1990 where she attended the University of Miami, Lamar University in Texas, and completed her masters degree at Rice University in Houston.  Ms. Smart has performed extensively in Europe and the U.S. with representation by Encore Concerts, and has appeared as soloist with the St. Louis Symphony, Alhambra Chamber Orchestra, Gorton Philharmonic, Lamar Chamber Orchestra, and both Chethams' Chamber and Classical Orchestras. Her television appearances have included masterclasses with Yehudi Menuhin and as the subject of a documentary profiling "A Day in the Life of a Young Musician at Chetham's School of Music." Among other masterclasses, she has played for Midori and Zachar Bron.  Ms. Smart has competed in the 10th International Tchaikovsky Competition and the Yehudi Menuhin Competition, and has been a prizewinner in many other competitions, including the British Violin Recital Prize, Elizabeth Harper Vaughn Concerto Competition, and the William C. Byrd Young Artists Competition.

Julia Hornberger, cello
B.M. Cello Performance, University of Missouri, St. Louis and The St. Louis Conservatory; teachers included John Sant' Ambrogio and Yuan Tung, both former SLSO members; accepted to the Chicago Civic Orchestra and offered a full scholarship for the Masters program in Cello Performance at the University of Depaul, in Chicago; performed as principal and section cellist in the Illinois Symphony, Fort Wayne Philharmonic in Indiana, Kenosha and Racine Symphony Orchestras, in Wisconsin; performed in numerous European summer music festivals, including the AIMS festival, in Austria; performed in the String Divas Violin/Cello Duet while residing in Wisconsin, private cello teacher and cello coach for students in the Midwest.

Maureen Bolain, Kindermusik & Music for Little Mozarts, coordinator
Obtained her B.A. in Christian Education summa cum laude with emphasis in child development, music and piano performance from John Brown University, where she won the Outstanding Cathedral Choir Member and Biblical Studies Faculty Awards.  She has taught and developed curriculum for preschool and elementary choirs and is an experienced piano teacher.  She taught at her own Kindermusik studio in South Bend, Indiana from 1998 – 2001, joining the Community Music School in 2001 where she has continued to promote the incredible physical, cognitive and social/emotional benefits of participating in music from a young age.  In addition to her role at CMS, Maureen is also the Music Director at Church of the Resurrection and accompanist for Francis Howell and Francis Howell Central High Schools. Maureen and her husband Jerry, also a musician, have an adult daughter, Hannah, who is a graduate of Kindermusik and continues to nurture a love for all genres of music.

Jeanne Magee, Kindermusik
Earned a B.A. degree in Communication with a minor in Psychology, University of Missouri; joined the Kindermusik Academy staff in 2003, teaching for CMS since 2013; Jeanne uses her vocal talents as a cantor, soloist, and choir member for her church, and has been working as a wedding vocalist throughout the St. Louis area for over 30 years.  As an advocate of the life-enriching power of music, Jeanne was inspired by the joy and educational advantages of Kindermusik since her two daughters Kathleen and Mary were enrolled in Kindermusik from newborns to age six, in each level of Kindermusik.  These Kindermusik graduates, Kathleen, age 19, and Mary age, 21 continued their music education through grade school and enjoyed singing, traveling, and participating in MSHSAA competitions with the Cor Jesu Academy Concert Choir as well.  Now in college, music continues to bring them joy through concerts and shared family love for musical theater.